Statistics is the grammar of Science.
– Karl Pearson

Data is the information collected through different sources which can be qualitative or quantitative in nature. Mostly, the data collected is used to analyze and draw insights on a particular topic.

1. Cylinder size, mileage, color, etc. for the sale of a car

2.If the cells in the body are malignant or benign to detect Cancer

Numerical data is the information in numbers i.e. numeric which poses as a quantitative measurement of things.

Discrete data is the information that often counts of some event i.e. can only take specific values. These are often integer-based, but not necessarily.

Continuous Data is the information that has the possibility of having infinite values i.e. can take any value within a range.

How many centimeters of rain fell on a given day

This type of data is qualitative in nature which has no inherent mathematical significance. It is sort of a fixed value under which a unit of observation is assigned or “categorized”.

Restaurant ratings from 1-5, 1 being the lowest and 5 being the highest

In mathematics and statistics, the mean is the average of the numerical observations which is equal to the sum of the observations divided by the number of observations.

The median of the data, when arranged in ascending or descending value is the middle observation of the data i.e. the point separating the higher half to the lower half of the data.

To calculate the median:

The mode of a set of data points is the most frequently occurring value.

Mathematically and statistically, variance is defined as the average of the squared differences from the mean. But for understanding, this depicts how spread out the data is in a dataset.

The steps of calculating variance using an example:

The formula for the same is:

The formula for standard deviation is:

When using sample data for analysis, the formula of variance is slightly different. If there are total n samples we divide by n-1 instead of n:

The concept of probability is extremely simple. It means how likely an event is about to occur or the chance of the occurrence of an event.

The  formula for probability is:

The probability of the coin showing heads when it’s flipped is 0.5.

Conditional probability is the probability of an event occurring provided another event has already occurred.

The formula of conditional probability: 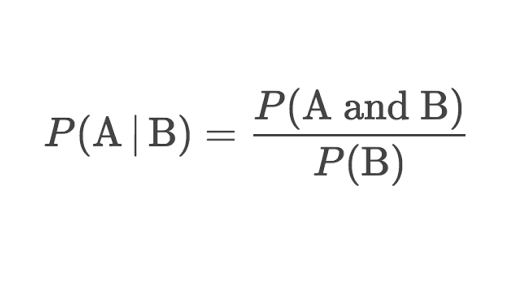 Bayes’ Theorem is a very important statistical concept used in many industries such as healthcare and finance. The formula of conditional probability which we have done above has also been derived from this theorem.

The formula for Bayes’ theorem is:

Let’s assume there is an HIV test that can identify HIV+ positive patients accurately 99% of the time, and also accurately has a negative result for 99% of HIV negative people. Here, only 0.3% of the overall population is HIV positive.

The topics of statistics and probability covered in the article are really important but there are many other topics such as Probability Distribution Functions and their types, Covariance, and Correlation, etc. that have not been covered here because they require separate attention due to their graphical nature.

Mathematics and statistics are the heart of data science. The topics covered in this article are the basis of many algorithms, error calculating formulas, and graphical understanding of things, thus are very important and cannot be ignored.

You can also read this article on our Mobile APP

Quantito is one of the leading companies providing business services for small, medium-sized businesses and large corporations. A lot of clients have already turned to us for help and use our services.